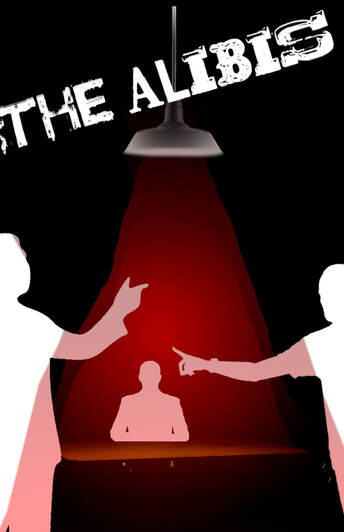 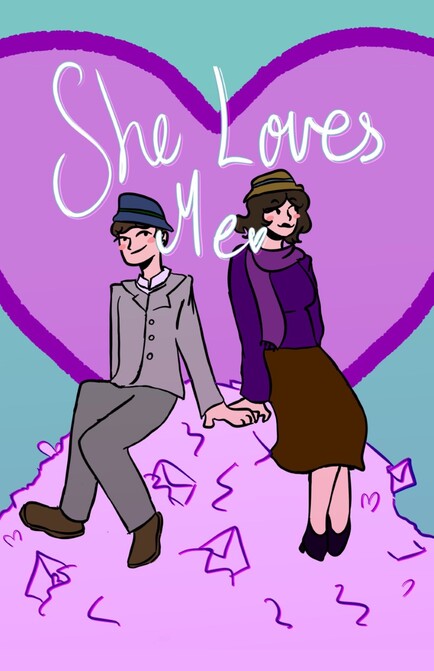 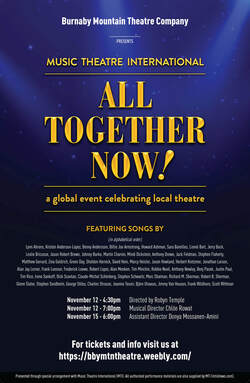 All Together Now!
ALL TOGETHER NOW! a global event celebrating local theatre

Head Over Heels the Musical 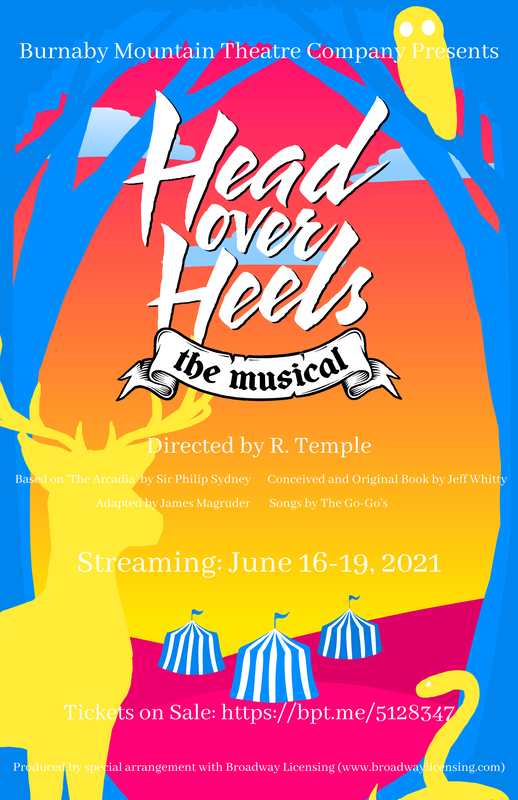 HEAD OVER HEELS is the bold new musical comedy from the visionaries that rocked Broadway with Hedwig and the Angry Inch, Avenue Q and Spring Awakening. This laugh-out-loud love story is set to the music of the iconic 1980’s all-female rock band The Go-Go’s, including the hit songs, “We Got the Beat,” “Our Lips Are Sealed,” “Vacation,” Belinda Carlisle’s “Heaven is a Place on Earth” and “Mad About You.”

A hilarious, exuberant celebration of love, HEAD OVER HEELS follows the escapades of a royal family on an outrageous journey to save their beloved kingdom from extinction—only to discover the key to their realm’s survival lies within each of their own hearts.

Game of Tiaras - CANCELLED DUE TO COVID-19
By: Don Zolidis 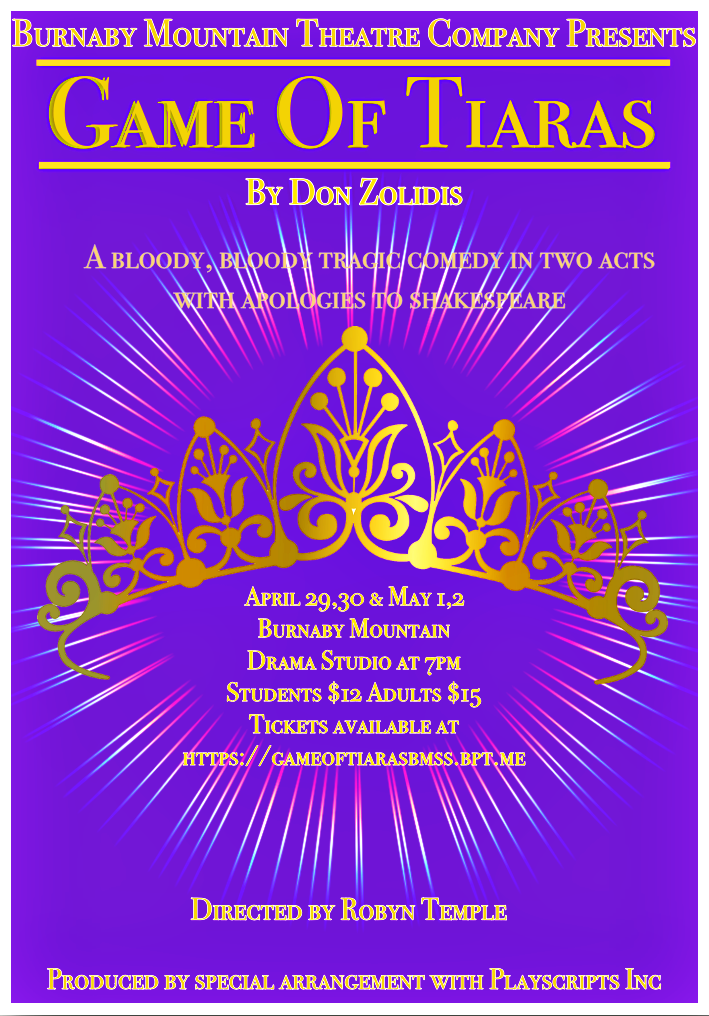 When the aging king of a Magical Kingdom (England) decides to split his empire between his three daughters, Cinderella, Belle, and the Snow Queen (who in no way resembles a copyrighted character), terrible tragedy ensues. Terrible, hilarious tragedy. Combining the gut-wrenching plot twists of Game of Thrones and the soul-numbing despair of Shakespearean tragedy, this adaptation of King Lear will leave you dying with laughter as the body count mounts. When you play the Game of Tiaras, you win or you die? 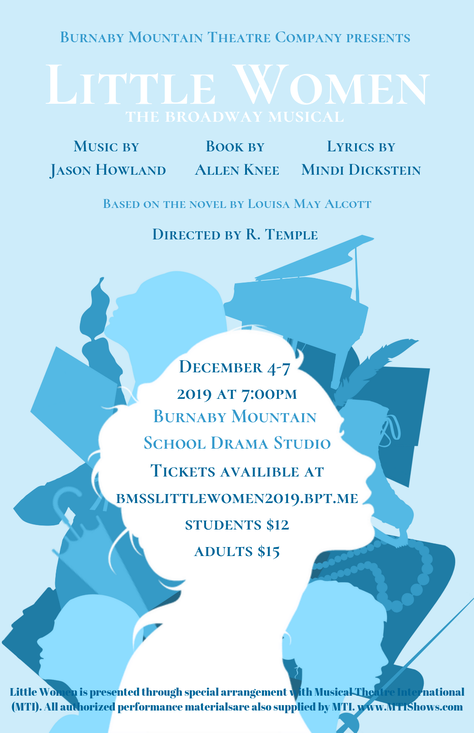 Based on Louisa May Alcott's American classic, this Civil War story of love and family stands the test of time.

Produced nationally and internationally, Little Women has been praised by critics for its ambition in adapting such a well-known story for the stage. This timeless, captivating story is brought to life in this glorious musical filled with personal discovery, heartache, hope and everlasting love. The original production starred the unparalleled Sutton Foster, who received Tony, Outer Critics Circle and Drama Desk nominations for her performance.
Based on Louisa May Alcott's life, Little Women follows the adventures of sisters, Jo, Meg, Beth and Amy March. Jo is trying to sell her stories for publication, but the publishers are not interested – her friend, Professor Bhaer, tells her that she has to do better and write more from herself. Begrudgingly taking this advice, Jo weaves the story of herself and her sisters and their experience growing up in Civil War America.
Little Women embodies the complete theatrical experience, guaranteeing a night filled with laughter, tears and a lifting of the spirit.

Shrek the Musical
Book and Lyrics by: David Lindsay-Abaire
Music by: Jeanine Tesori 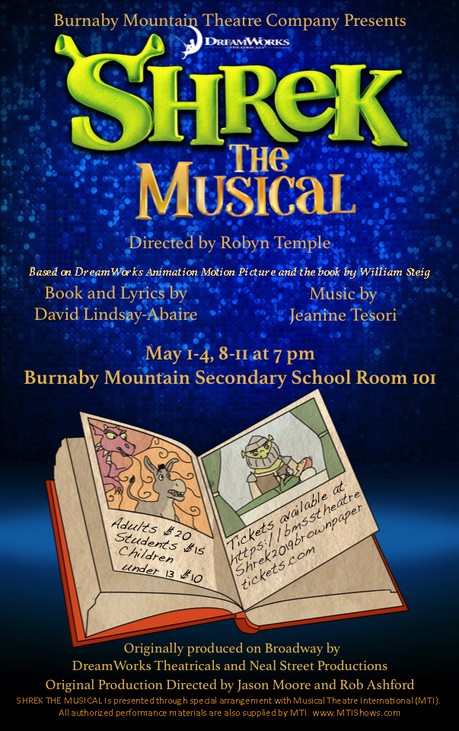 Based on the Oscar-winning DreamWorks Animation film, Shrek The Musical is a Tony Award-winning fairy tale adventure, featuring all new songs from Jeanine Tesori (Thoroughly Modern Millie; Caroline, or Change) and a sidesplitting book by David Lindsay-Abaire. Shrek brings all the beloved characters you know from the film to life on stage and proves there's more to the story than meets the ears.

"Once upon a time, there was a little ogre named Shrek...." And thus begins the tale of an unlikely hero who finds himself on a life-changing journey alongside a wisecracking Donkey and a feisty princess who resists her rescue. Throw in a short-tempered bad guy, a cookie with an attitude and over a dozen other fairy tale misfits, and you've got the kind of mess that calls for a real hero. Luckily, there's one on hand... and his name is Shrek.

The Bold, The Young, and The Murdered
By Don Zolidis 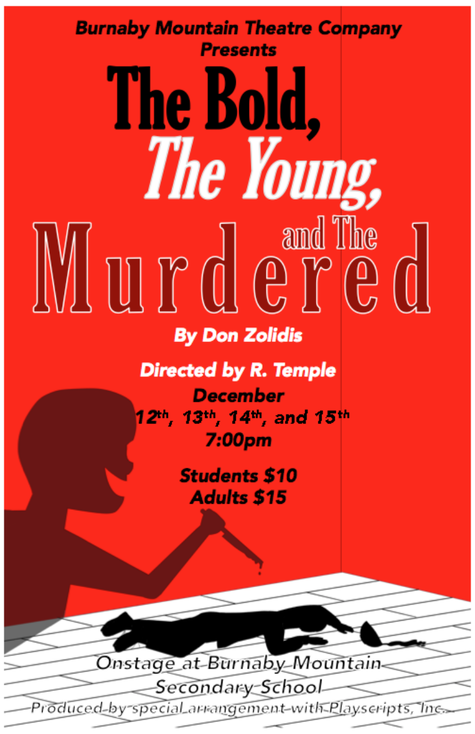 The long-running soap opera The Bold and the Young is in its last days: its hunky hero has self-esteem issues, its villainous old man is more interested in soup than the actual show, and its heroines are slightly psychopathic. The executive producer gives the squabbling cast an ultimatum: Complete one episode overnight or the show dies. Presented on December 12th, 13th, 14th, and 15th, 2018.

Burnaby Mountain Secondary School Drama Room May 3, 4, 5, 10, 11, & 12, 2018
The Drowsy Chaperone is a show-within-a-show about a wedding and the life of a die-hard musical theatre fan, Man In Chair, who's listening to a record where he shows the audience a way into the world of a 1928 classical musical. He delights in the backstage stories of the performers of the show and in the elements of that era which include jazz, vaudeville, melodrama, and plenty of spectacle. Just like all of our productions, our wonderful crew and cast showed determination and all their hard work

A note from the director: "...We learn that it's not just about spinning a record, it's about how art can transform your sense of the universe..."

​The Wizard of Oz!

Students from Burnaby Mountain in grades 8-12, under the direction of Felicity Rudolph, traveled from Kansas all the way to Oz on this incredible journey. With Dorothy and her friends along the Yellow Brick Road, they searched for the things they hold most dear.
The Burnaby Mountain cast and crew of the beloved musical had a blast while working hard to put on this great production, come watch a current production coming soon!